Three wheels on my wagon 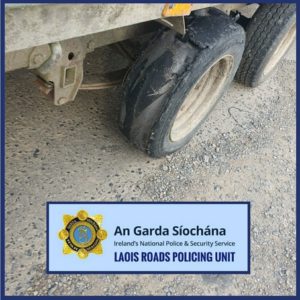 The trailer that was stopped by the Laois Roads Policing Unit

A SPEEDING driver caught by Laois gardaí yesterday was towing a trailer with a tyre that was literally in bits.

The tyre was in such shocking condition that gardaí escorted the van and trailer  off the motorway. The driver had to replace the dangerous tyre before he was allowed to continue the journey.

The Laois Roads Policing Unit initially stopped the van towing a trailer for a speeding offence on the M7 yesterday morning.

When they inspected the trailer, they discovered that one tyre was completely bald with a large section ripped off. The driver was exceeding the motorway speed limit of 120kph.

The vehicle was escorted off the motorway by gardaí, who ensured that the tyre was replaced before the driver was allowed to resume the journey. A fixed charge penalty notice was issued.