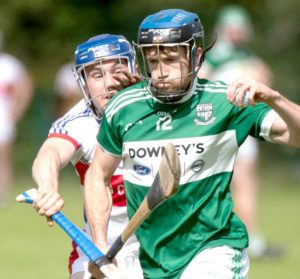 David OMahoney will lead the Portlaoise attack in their quest for final place  Photo: Denis Byrne

IT used to be senior ‘B’, then senior ‘A’ and now it is Premier Intermediate and still some of the same old faces are knocking on the door.

Five years ago Portlaoise defeated Clonaslee/St Manman’s to claim the title but after a year in senior they were back in relegation territory. Last year they fought a hard battle before going down to Abbeyleix. Two years ago Portlaoise and the Harps contested the final and Portlaoise won their second in this grade.

This year the title looks like being decided between the same pairing but Slieve Bloom and Camross might think otherwise.

The competition, as pointed out earlier, has produced some good close games and perhaps the four best teams are in this weekend’s semi-finals.

Portlaoise would have entered as favourites and facing Ballyfin in round one was an ideal test in Mountrath. Ballyfin challenged for most of the game but ran out of steam because they were fighting on two fronts with a limited panel. Portlaoise were in the driving seat and then engaged the new kids on the block Colt-Shanahoe. This was another good contest but the newcomers were still recovering from a drubbing from Slieve Bloom and Portlaoise claimed a second victory.

In the other group, after losing another final, the Harps were favourites and they improved with each game thus they enter the semi-final as warmest of favourites.

These two used to meet regularly at senior level but after Camross surprised Portlaoise in ’96 they have seldom crossed paths at knock out or other wise. It is hard to credit Portlaoise have not reached a senior final since losing to Clough/Ballacolla 11 years ago.

Portlaoise began by beating Ballyfin by a narrow margin in a well contested game and when they faced Colt-Shanahoe, this was a greater challenge. But the newcomers lacked experience and after a good beginning they ran out of ideas while Portlaoise finished in style.

Going into round three Portlaoise were already guaranteed a semi-final place but their meeting with Slieve Bloom would put the winners in top spot. Borris-in-Ossory housed a well contested clash but in the closing 15 minutes Portlaoise pulled away to top the group.

Camross were intermediate champions last year beating Clough Ballacolla and Borris-in-Ossory on the run in but lost a few players to their first team.

They began poorly against the Harps in Raheen but put in a great second half and lost by a single point. Next up were Mountrath in Shanahoe and after a close first half Camross eased to victory.

Their final outing was in Portlaoise’s home ground and after Clonaslee/St Manman’s applied early pressure it was Camross who pulled away to claim second place.

Overall Portlaoise have been consistent and they are determined to return to senior and have fire power although Aaron Bergin has been their main threat.

These two met last year and the Harps had 15 points to spare but Slieve Bloom were understrength and ended up contesting the relegation final. The Harps beat Rosenallis by six points but when the two met in the final Rosenallis turned the tables and we all know where they are now.

This year Slieve Bloom turned heads in the opening round with a splendid performance against Colt-Shanahoe. That game marked them as serious challengers but in round two Ballyfin had them on back foot. But in a dramatic finish Slieve Bloom stole both points with a late point assuring them a semi-final place.

Portlaoise provided the opposition and it looked shadow boxing for a while. Portlaoise then began to pull away but Slieve Bloom, with two good goals, stayed in touch until the final quarter when Portlaoise galloped home.

The Blooms were without the influential Ben Conroy but he will be home for this game but when Slieve Bloom look at the Harps score-line last time out against Mountrath it will give them sleepless nights, Ben Conroy or no Ben