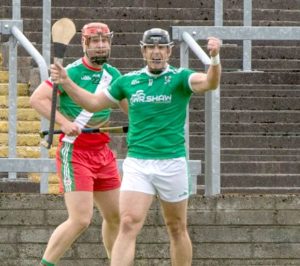 IT’S down to four, the surroundings may be different but the names are nearly the same as they were eight years ago. The only change sees surprise packet Rosenallis taking the place of their neighbours and deservedly so after two impressive victories over Camross and Borris/Kilcotton and sharing the spoils with Ballinakill in the opening round. Apart from that the rest of the championship ran along predicted lines.

In the other side of the draw the big two Clough/Ballacolla and Rathdowney/Errill produced a high scoring draw that saw the champions come from behind and draw level before taking the lead before Clough/Ballacolla snatched a late equaliser.

Will they meet again? It is looking likely but the other two will have their say. In reality that was the only competitive game in that group.

Abbeyleix defeated Castletown and guaranteed St Lazerian’s senior status for next year and already Castletown were staring down the barrel of relegation and that is how it turned out.

Camross made their exit in round two when Rosenallis caused a big upset beating one of the big four now they were contenders and when they beat another big name Borris/Kilcotton and Ballinakill only needed a draw with Camross in the last round to avoid a relegation scrap but Camross sneaked their only victory but missed out on knockout hurling for the first time in 50 years.

Yes, that’s correct, no need to adjust your sets. Many expected Clough/Ballacolla to make it this far but can they go one better than last year when Borris/Kilcotton ended their ambitions. Three years ago they reached their first final since beating Camross in 2015 but black and amber got revenge.

Last year Canice Coonan got them to the league decider but again suffered defeat to Camross but were different in the championship. However they collapsed in the semi-final. They are better this year and looked hungry in round one sharing with their neighbours.

Declan Laffan stepped in and if ever a man knows about winning finals he does. Twenty-eight years ago at age of 16 he helped Loughmore win the senior football championship. Seven years ago he managed Loughmore to the double in Tipperary and a year later retained the football title. Last weekend Loughmore faced Kiladangan in the first leg of the double and this weekend face Clonmel Commercials in the football decider.

Rosenallis brought in Brian Troy from the great Lusmagh family and he has been an inspiration. Rosenallis know all about doubles beating The Harps in hurling final last year then their neighbours Clonaslee/St Manman’s in the football final.

This year they played simple hurling, improving with each outing but their performance against Borris/Kilcotton was stunning. Their defence completely tied up last year’s finalists. After two big scalps, can they make it three? With players like the Fennells, Conor Cosgrove, Pat and Tom Keating, John O’Loughlin, Brian Fitzpatrick and John Lennon they have every chance.

Rathdowney/Errill are bidding to make history on Sunday, that is to reach three successive finals, something that has eluded them and victory will give them a chance to become only the second club to put titles back to back since Castletown did in 2003 and Camross did two years ago beating them.

This year they began against their neighbours across the river and as so often they shared the spoils. After that they breezed past Castletown and completed their campaign with another big win over Abbeyleix to top their group.

They have looked impressive and this year without their most consistent player for many years, Brian Campion but their defence has not being troubled apart from the first round. Up front they look potent with Pat McCane and Brandon McGinley growing in confidence surrounded by talented men like Ross King, Pat Purcell, Eric Killeen and Jack Ryan and, even if Mark Kavanagh should not make it, they are still very strong.

What of Borris/Kilcotton? In 2016 they fought a great battle and drew with Sunday’s opponents but showed their qualities taking the title in a high scoring replay. Since then, well remember that year when Leicester City won the Premiership with a swagger, but what did they do since.

Borris/Kilcotton are similar. Last year they beat Camross and Clough/Ballacolla in the semi-final and went into the final as favourites against Sunday’s opponents. Last time out they were stunned by Rosenallis and their forwards, who looked potent in the opening rounds, were completely unhinged and the Rathdowney/Errill defence are likely to do likewise. Verdict Rathdowney/Errill