‘It was a miracle that someone
wasn’t killed’ – Judge Staines 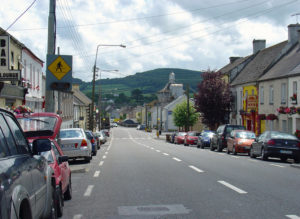 A LAOIS man whose 12-minute stretch of dangerous driving “put the whole of Stradbally at jeopardy” and could potentially have resulted in the death of four people received a six-month prison sentence at Portlaoise District Court.

The defendant was charged with seven counts of dangerous driving; drug possession; and no driving licence or insurance. The offences occurred at various locations across Stradbally on 15 September last.

The car then crossed the white line, forcing an oncoming vehicle to swerve.

The car then came to a stretch of roadworks, where only one lane was open and the red traffic light was on, but it continued on forcing cars onto the grass verge.

The car travelled on the wrong side of the road and at this point Garda Cooper contacted his colleagues to arrange a stinger device. The gardaí stopped all traffic and deployed the stinger, as the Peugeot came travelling on the wrong side of the road at 100kph. It swerved to avoid the stinger but sustained a punctured tyre and carried on, forcing a female pedestrian to jump out of the way to avoid being hit.

The car eventually turned into a private laneway and the accused exited the driver’s side. He admitted that he had no licence or insurance and the gardaí also found €20 worth of cannabis in the vehicle.

Garda Cooper said that he had known the accused for years. He said the accused had previous convictions, but his last was back in 2015.

Defence solicitor Josephine Fitzpatrick said the reason for the incident was that her client had no insurance or licence.

Ms Fitzpatrick acknowledged that her client had “put the whole of Stradbally at jeopardy” on the day.

Judge Catherine Staines said this was an appalling episode of dangerous driving, with at least four incidents where someone could have been killed.

“It’s just a miracle that someone wasn’t killed,” said Judge Staines, crediting the good work of the gardaí in the matter.

The accused was sentenced to six months in prison and received driving disqualifications of two years and four years. Recognisance was fixed in the event of an appeal.

Read full details of this and other cases from Portlaoise District Court in the next edition of the Laois Nationalist, in shops from Tuesday 29 September and in our epaper. For legal reasons, names and addresses of defendants are published in the newspaper, not online

Filed under: Put the whole of Stradbally in jeopardy