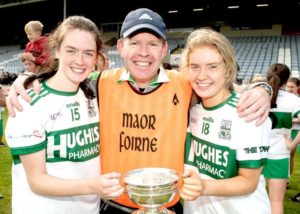 AMY Byrne displayed nerves of steel when she stood over a late free on Sunday in Mountrath. If she converted she would earn Portlaoise another shot at O’Moore’s in the junior camogie final, miss and it would mark the end of the Town’s campaign

Calm as a cucumber Byrne dissected the posts and the two sides will have to do it all again.

Byrne scored three points for Portlaoise in the final but it was a remarkable achievement that the teenager was even playing in the camogie final. Less than 24 hours earlier she was part of the Portlaoise team that made history by capturing the club’s first ever senior ladies football title, and in the process stop Sarsfields incredible run.

The final produced a most exciting game with the balance of power swinging one way and then the other.

Amy Flanagan gave O’Moore’s the early lead only for it to be cancelled out by Amy Byrne a minute later. Chloe Norton then pushed Portlaoise ahead on seven minutes only for Elaine Downey to cancel it out soon after.

A point from Ciara Murphy, however, had Portlaoise 0-3 to 0-2 up at the first water break.

The only score of the second quarter was another Amy Byrne free and Portlaoise were 0-4 to 0-2 ahead at the break.

Mary Hyland reduced the gap four minutes into the second half and then a brilliant goal from Amy Flanagan had O’Moores back in the lead two minutes later.

Ciara Murphy hit back for Portlaoise to have the deficit back to one, 1-3 to 0-5, by the second water break.

Ciara Murphy and Ciara Byrne pointed to put Portlaoise back into the lead but a Hannah O’Connor free had it level again with three minutes remaining.

Substitute Amy Singleton gave O’Moore’s the lead with a minute of normal time remaining but in a welter of excitement, Amy Byrne levelled things again from a free.

The sides will have to meet in a replay to decide the winner but a date and venue will have to be confirmed as Portlaoise are in Leinster club football action next weekend.