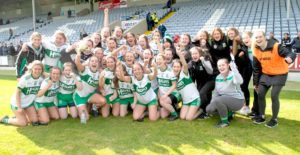 PORTLAOISE have won their first ever Laois senior ladies football championship title after an incredibly entertaining game in MW Hire O’Moore Park on Saturday afternoon. They finished out their 2020 season unbeaten and made history while doing so.

Sarsfields were aiming to claim their eighth consecutive title having only lost one game this year, that being to Portlaoise in the group stages of the championship.

On paper, this was shaping up to be one of the most entertaining final’s in year’s and, while often it is the case that these games don’t live up to their expectations, this one certainly did. Portlaoise had the edge on the day and were able to take control much better than they have in previous years.

This pairing are no strangers to each other, especially in a county final setting but Sarsfields always overcame the Town.

Player of the match, Aisling Kehoe was the top scorer on the day with 1-3 under her belt and it was she who scored the first point of the game. Mags McEvoy was first to get Sarsfields on the scoreboard just moments later.

Portlaoise went ahead in the eighth minute thanks to a point from Alison Taylor after she caught a rebound and popped it over the bar.

The defensive systems from both sides in the opening 15 minutes were very impressive and it seemed as though both teams would have to work extra hard to get past each other’s rearguard.

After six scoreless minutes but impressive football, Clare Conlon converted a free for Sarsfields just before the first water break. The game resumed with a score for Portlaoise which came from Fiona Dooley and Sarah Anna Fitzgerald followed her lead soon after.

Then came Aisling Kehoe’s goal to drive Portlaoise on. After a run down the middle, splitting the Sarsfields’ defence, Dooley spotted Kehoe ahead and she made sure it would go nowhere but the back of the net. From there, Portlaoise kicked on and took control.

Sarsfields were unlucky to miss a couple of opportunities in the build up to half time but Lorna O’Sullivan made sure to split the post in the 27th minutes, the Mountmellick side’s first score in 12 minutes.

Laura Marie Maher followed up with another point just before half time to leave the score at 1-4 to 0-5. 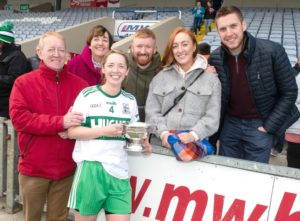 The game could have gone either way still but the first 15 minutes of the half would set the tone for a very tense second period. Maher kicked the first score of the new half and as much as Portlaoise tried to open up a decent lead, Sarsfields were still in a very determined mood.

Ellen Healy cancelled that out a minute later and Leah Loughman followed up with a free to put Portlaoise three points clear after 35 minutes.

Around this stage was the defining period. If Portlaoise dropped momentum at this point, it could have been a much different result. They pushed on.

The next number of attacks resulted in three wides in a row, which would later prove to be detrimental for Sarsfields.

Following the second water break, Conlon landed another free to get the game back up and running. This was her fourth free of the game having being held scoreless from play by Ciara Byrne.

With nine minutes remaining Sarsfields threatened to attack the goal time after time but that would not materialise.

Leah Loughman and Joyce Dunne traded points. With just a two points between the teams and three minutes of ordinary time to play, Sarsfields’ Aisling Bohan forced a turnover and another chance was created but within seconds, a free to Portlaoise was awarded.

That was the tale of the last ten minutes. It was tit for tat, turnover for turnover, almost a competition of who could get the better turnover. The sides shut each other down multiple times but finally Aisling Kehoe capitalised on an opportunity to put Portlaoise three points clear to make history. 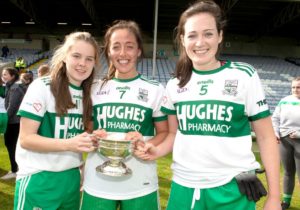