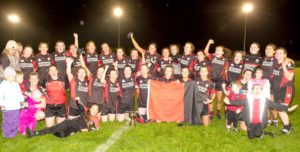 ALL of 19 years ago she kept her cool to convert a late, late point to secure Laois the All Ireland title. On Wednesday night Mary Griffin (Kirwan) again displayed nerves of steel in the second minute of stoppage time to score the point that would see her beloved Shanahoe return to the senior ranks for 2021.

It was perfect conditions for football in McCann Park and both teams held their own throughout the game. The sides went score for score during the whole game, however that free from Griffin proved to be the vital score as Shanahoe captured the title.

Shanahoe made their numerical advantage count after Aoidean Delaney was sent to the line for 10 minutes in the 49th minute with Trish Fogarty following suite a few minutes later. Shanahoe now had a two player advantage as the clock ticked towards the 60th minute. They themselves finished with 14 players after Jeanne de Tootquet received a yellow card.

Mary Griffin got the game’s first score as she slotted over a free. Park/Ratheniska replied briskly with a fisted point from Ailbhe Griffin and a free from Laura Crawford.

The next score would be Shanahoe’s goal. A superb run by Mary Griffin saw her set up Aoife Finlay to smash the ball beyond Emma Greene. Shanahoe almost got in for another goal soon after when Griffin’s free into the square led to a goalmouth scramble with Jane Mullen’s effort cleared off the line.

The game then hit a scoreless patch as both defences began to dominate.

Griffin got her third point of the game with yet another free as Park/Ratheniska were penalised for taking a short kick out.

Crawford got Park/Ratheniska’s third point after good build-up play through the lines.

Shanahoe were heavily reliant on Griffin’s frees as she got her third of the game before Rachel O’Connell converted a free while Laura Hyland pointed from play to leave one point in it at half time, Shanahoe leading 1-3 to 0-5.

Park/Ratheniska came out firing in the second half as O’Connell notched 1-1 in quick succession. Her point was a delightful score before a long ball in from her deceived Eimear Barry and landed in the goals.

Griffin once again pointed a free before Lisa Dunne got Shanahoe’s first point from play. O’Connell took her tally to 1-3 as she slotted over from play ensuring Park/Ratheniska led by two points at the water break.

Substitute Aoife Daly made it a three-point game after a mazy run gave her the simple tasking of kicking over the black spot. This would be Park/Ratheniska’s last score of the game as Shanahoe made the most of their numerical advantage.

Dunne pointed her second of the game while Laura Finlay and Kate Jacob both raised white flags to level the game and extra-time looked to be on the cards.

However, Griffin held her nerve once again in the 62nd minute as she curled over a free to win the title for Shanahoe.

Park/Ratheniska were agonisingly close to levelling the game late on but Anna Healy’s effort hit the post and fell kindly into a pair of Shanahoe hands.