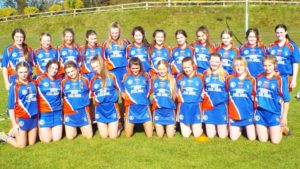 BALLACOLLA was the venue on Saturday for the final of the Laois under-16 ‘B’ championship decider. The two teams gave a great exhibition of camogie and great to see a big crowd in attendance to support both sides.

Abbeyleix were hoping to complete a unique double as just hours earlier a cavalcade welcomed home the minor hurlers after they completed the minor double at the expense of the Harps.

When the girls shot an early point it was looking promising. It got even better when a long ball reached Hollie McDonald and she beat the keeper from close range.

However, after that the Castletown girls tightened up their defence and with full forward Aoife Cuddy picking off points from frees and play the sides were level 0-4 to 1-1 at the first water break.

The sides then traded points before Abbeyleix regained the advantage, Eimear Kelly converting a free. Aimee Byrne and Jaydyn Cuddy put Naomh Eamon in front for the first time to lead 0-7 to 1-3 at the interval.

After an early exchange of points Aimee Byrne pushed Naomh Eamon back in front and Caoimhe Cuddy added a spectacular effort from play.

Abbeyleix launched attack after attack but the Saints’ defence stood firm but Abbeyleix refused to give up. At the other end the star of the show, full forward Aoife Cuddy went on a solo run and although Abbeyleix surrounded her she somehow knocked the ball into the net.

Now there was no way back for Abbeyleix but they can be proud of their contribution to a thrilling contest.

Afterwards Barney O’Connor complimented both teams and their mentors and presented joint captains Fia Cuddy and Shannon Conroy with the winner’s trophy.