Changes on the card for Saturday 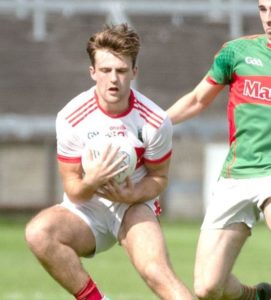 Could Emo’s Jack Owens get a call up from Mike Quirke Photo: Denis Byrne

IT is now over seven months since Mike Quirke last picked a Laois football team. Now after relatively few training sessions the manager must sit down and select a starting 15 to travel to Mullingar on Saturday facing Westmeath in the resumption of this year’s Allianz National Football League.

Back in March all the action came to a shuddering halt. Pitches across the country fell silent and were unused. Slowly action was resumed, but far from normal under the return to play protocols.

Since early August we have seen a return of the championships and these will have provided Quirke with some little insight into how the players are performing.

And so it is under these strange circumstances that Mike Quirke must select his next team. Will he stick with the bones of the side that seen Laois win two, draw one and lose two of the game played so far|, or will he have been influenced by what he has seen over the course of the local championship so far?

Quirke has been very loyal to the players he has been selecting. Amazingly over the course of the five game played in the league he stating 15s have featured just 20 players, remarkable consistency.

So who are, or are there any, players who might force their way onto the team to take on Westmeath?

I suppose the obvious place to start is with the goalkeeper. In the pre-Quirke era Graham Brody had been the automatic choice between the sticks but this year Niall Corbett started all five games. Ironically, it has been up front that Corbet has been making the headlines with his club, Clonaslee/St Manman’s. he has been central to their march to the IFC title culminating with him scoring 1-6 in the final. That said it is hard to see Quirke moving him to a forward role and he will probably still be wearing the No. 1 jersey.

Similarly it is hard to see too many changes being made in defence. Once again Mark Timmons showed that he is the best defender in the county. He is best deployed at full back and expect to see him there on Sunday.

Gearoid Hanrahan, Trevor Collins and Brian Byrne shared the corner back positions between them but they could face competition this time around. St Joseph’s James Kelly and Portarlington’s Cathal Bennett have impressed during the championship and will be pushing for a start.

Across the halfback line Sean Flynn, Robbie Pigott and Patrick O’Sullivan were constants, but that will change. O’Sullivan has missed the whole pre-championship and championship as he had been a six month tour of duty with the Defence Forces in Syria.

There are three potentials to fill his slot. One is club mate Adam Ryan who has impressed in the championship. Likewise Emo’s Padraig Kirwan and Graiguecullen’s Luke Aylesbury have impressed and I would go with Kirwan.

The midfield pairing would look done and dusted with Kieran Lillis and John O’Loughlin resuming normal service. This was the case in the earlier rounds except for two games when Lillis was deployed at full forward but he is more effective in the middle of the park.

So is there anyone who might displace either? James Jinn has stood out in

Ballyfin’s drive to a second successive semi-final while Darren Strong has also operated here for Emo. However, it is hard to see either getting the nod this weekend.

That said Strong should be in with a shout for a starting place in the half forward line, and personally I would like to see him wearing the number 11 jersey.

Portarlington’s Sean Byrne is most likely to start on one wing given his form in the earlier protein of the league and with his club in the championship. So who will join him? Ironically one of the most impressive wingers in the championship has been Courtwood’s Niall Donoher who has hung up his inter-county boots. A strong case cane be made for Matthew Finlay who has looked good with O’Dempsey’s and he is a top notch free taker.

The full line could well see some new faces as the championship has witnessed some outstanding displays. Ballylinan’s Gary Walsh came on as a substitute in three of the earlier rounds but on his championship form he has to be a starter on Sunday. He has virtually single-handedly carried his club this year, scoring at will.

Jack Owens has stood out for Emo in their march to the last four and deserves a chance to show how he might perform at county level. Sean Moore has been on fire for Ballyfin and he will torment any defender. Evan O’Carroll is another and possibly his experience will see him nail down one of the corner slots.

Others who could be in contention would be Colm Murphy, Garry Comerford, Michael Kehoe, Mark Barry, Ross Hennessy and Ross Munnelly.

My three would be Byrne, Walsh and Moore.