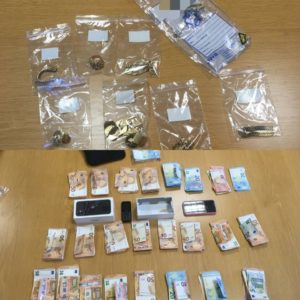 The cash and jewellery seized by Portlaoise gardaí

A LARGE amount of jewellery and cash has been seized by gardaí at a checkpoint in Laois.

Local gardaí uncovered the substantial quantity of cash and a variety of jewellery when they stopped and searched a vehicle this afternoon.

Gardaí from Portlaoise and Mountmellick were operating checkpoints in Ballybrittas between 1pm and 2pm when they decided to carry out a search of the vehicle, after speaking to the driver.

The search resulted in what gardaí describe as “a substantial amount of cash” and jewellery worth more than €13,000, including brooches and expensive watches.

While gardaí have not confirmed the total amount of cash involved, it is understood to be well in excess of €20,000. Mobile phones were also seized.

The female driver was arrested at the scene and has been detained for questioning in connection with the find, which is believed to be associated with money laundering.