Another banned driver bites the dust 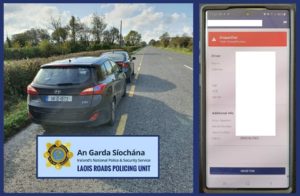 YET another banned driver was caught by gardaí in Portlaoise today on a journey out of the town.

The culprit was arrested and the car was seized following the incident on the outskirts of Portlaoise.

The driver has been charged to appear before an upcoming sitting of Portlaoise District Court, for traffic offences that include driving while disqualified.

The arrest was made during patrols by the Laois Roads Policing Unit, assisted by the Laois Divisional Drugs unit in an unmarked patrol car. The driver’s car (pictured in front) was towed away from the scene.