Flooding in Laois village is ‘like monsoon season in China’ 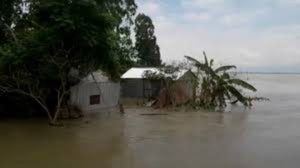 FLOODING on a Laois village road is ‘like monsoon season in China’, according to a local councillor.

Cllr Conor Bergin made the comment at a council meeting today, as he appealed for flooding issues to be resolved in Killadooley.

The Fine Gael councillor said he had videos on his phone of rainwater pouring down the road outside a particular house.

“No one should have to live with that kind of flooding. It clogs up the entire road. It’s like something you’d see in monsoon season in China,” he told a meeting of Borris-in-Ossory/Mountmellick municipal district.

He was supported by cllr John King, who said he drives that particular road every day and is familiar with the flooding problem. He said the properties on the road were built around 2003 and Laois County Council carried out two projects in the past to relieve flooding.

Clr King said part of the problem is that the field on each side of the road is quite high. He also asked whether the council checked that planning conditions were adhered to.

District engineer Edmond Kenny said it was the responsibility of landowners to retain water on their lands, through drainage and other measures. He told cllr King that he would check the planning conditions.

The engineer said a level survey would be carried out on the road and Cllr Bergin would be informed, once the cause of the flooding was established.

Cllr Bergin also asked for flooding problems to be resolved urgently at Derrynaseera/Anatrim Bridge in Coolrain. The engineer replied that maintenance crews would attend to the location in coming weeks.

Chairman cllr Seamus McDonald highlighted similar flooding problems at private homes in Clonurk and Cavansheath, Ballyfin. The engineer said a level survey would be carried out in Clonurk, while maintenance crews would do work in Cavansheath over coming weeks.