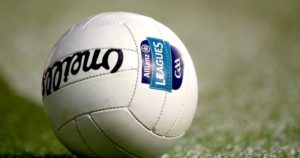 This has been a year the likes of which has never been experienced before. Coronavirus ensured that the whole country was brought to a abrupt halt in mid-March, and that included a cessation of all sporting activity.

For many the only thing that kept them going was the hope that football, and sport in general, would make a return sooner rather than later. Eventually light began to appear at the end of the tunnel, the GAA began to display some optimism of a return to play.

Here in Laois the first action of the field of play came in the first week of August, albeit with virtually no spectators. However, we got to look at the championship games thanks to the new streaming service initiated by the County Board.

Then the numbers allowed to attend game was upped to 200 and at least there was some bit of atmosphere in MW Hire O’Moore Park.

But just as our championships were reaching their climax Coronavirus struck again and the government placed the entire country in Level 3 meaning an end to most live sport action once again.

Twenty four hours prior to the government’s decision the GAA authorities had taken the decision to terminate all club activity but at least we had the deferred national football league to look forward to before the championships commence in November.

Laois footballers have two league fixtures remaining, both away to Westmeath and then Fermanagh, and with that in mind we look forward to Laois’s outing in Mullingar next Sunday.

Division 2 is extremely competitive with only three points separating the top tem from the seventh placed, Armagh and Kildare respectively. Laois could still win promotion to Division 1 but if results did not go their way they could face relegation.

There will be no league finals this year meaning the top two teams will be promoted and the bottom two relegated.

Next Sunday’s opponents, Westmeath stand in fourth position, one place but on level points with Laois. A win would place Laois in a strong position because with the top three involved with each other over the remaining two rounds, second placed Roscommon play both Armagh (first) and Cavan (third), points are going to be lost by some of these teams.

The fly in the ointment is whether or not Fermanagh will be in a position to play either of gheir remaining games after their county board called a halt to all action in the county as a Covid-19 surge has hit the senior football squad.

In a statement they said: “In order to prevent any further spread of this virus, and to protect the health of all those involved and the wider community, all collective activities involving the county’s senior football, senior hurling and minor football panel are suspended until further notice.”

Fermanagh lie bottom of the table and if they cannot play either of their remaining one wonders what the GAA’s stand will be if this occurs.