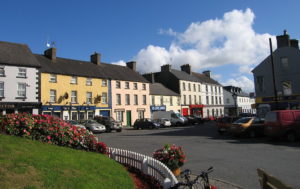 PLANS are underway to introduce a two-hour time limit on parking in Mountrath.

A proposal developed by Laois County Council will be trialed in coming weeks and will go out to public consultation.

The scheme aims to free up more parking spaces in the town centre, to encourage passing traffic to stop and give businesses a much-needed boost.

Council official Georgina Ireland gave a presentation on the plan in county hall this morning, at a meeting of Borris-in-Ossory/Mountmellick municipal district. The plan was unanimously welcomed by councillors.

Ms Ireland said three ‘pilot sites’ were identified in Mountrath, Abbeyleix and Mountmellick, with Mountrath the first to have a trial rollout of time-limited parking. She said it will not involve parking fees and enforcement will fall to traffic wardens and gardaí.

In developing the Mountrath proposal, the council identified 43 parking spaces and two disabled spaces in the town centre. Between 50% and 60% of these spaces are occupied all day, which prevents a regular turnover.

The council also found that two car parks in the town – at the Bank of Ireland and the Macra hall – are under-used, so the pilot scheme aims to encourage more people to park there. This would free up more on-street spaces and increase footfall in the town centre.

Signage would be erected for time-limited parking between 8.30am and 5.30pm Monday – Saturday, allowing a maximum stay of two hours.

A two-week public consultation period will be advertised shortly, to get feedback from business people and others.

Cllr James Kelly said he welcomed the project, as all-day parking is ‘a major crux’ for Mountrath but he stressed that public consultation would be key. He felt that better lighting and CCTV would be necessary for security in the Bank of Ireland car park. A collapsed wall at the rear of the car park would also have to be removed.

Cllr Kelly added that the council owns some land behind the wall and this could provide up to 20 extra parking spaces, while line marking would also increase the number of spaces available in the car park.

Cllr Ollie Clooney also welcomed the plan but was disappointed that Durrow was not selected, as it has no public car park and the issue is ‘the biggest bone of contention’ for local people.

He said: “Durrow is worse than the three towns selected, as there is no car park. There is a lot of through traffic that business people could make money out of but there is nowhere for them to park, as people are leaving their cars there all day and night. There are a few derelict sites that could be looked at. We have to get a car park in Durrow.”

Ms Ireland replied that if the scheme proved successful in Mountrath, it would be rolled out to other towns. Issues could emerge during the trial period in Mountrath that could be helpful in applying the scheme to other areas.

She said: “These three pilot sites have particular issues and we expect to see these issues reflected in other areas. If this is successful in Mountrath, it will be rolled out to other areas. It’s a ‘suck it and see’ situation.”

Cllr Conor Bergin said the Mountrath proposal was good but wondered how time-limited parking would be enforced.

Ms Ireland replied that Laois had only two traffic wardens for the whole county and they couldn’t be cloned, so gardaí would also have a role in enforcement.

She confirmed that there are no plans to introduce paid parking in Mountrath, as this would require adopting bye-laws.