Laois drivers slip-sliding away in Butterisland 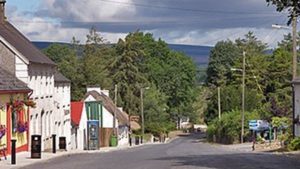 The village of Coolrain in the foothills of the Slieve Blooms

A ROAD in Butterisland near Coolrain is well named, according to a local councillor.

“You would slide off it now as if there’s butter on the road!” cllr James Kelly told a council meeting yesterday.

The Mountrath councillor asked for repairs to be carried out on the L10591-0 road in the Butterisland townsland, to make it safer for motorists.

At a meeting of Borris-in-Ossory/Mountmellick municipal district, he said the Butterisland road surface is very poor and cars are practically sliding off the road.

Cllr Kelly also asked for traffic calming measures at nearby Clonincurragh, Mountrath, where he said there are a number of road safety issues.

He commented: “There is a very steep descent there. You wouldn’t see it in the Tour de France!”