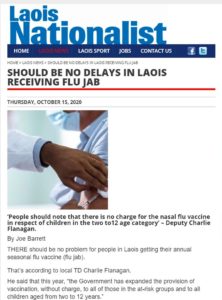 ‘The fact that we can’t tell patients exactly when we will have vaccines available is leading to huge amounts of uncertainty and frustration, with people fed up of having their appointments rescheduled or cancelled due to the shortage of vaccines’ – The Irish Pharmacy Union

There has been a huge reaction to our online story to the statement issued by Laois TD Charlie Flanagan in which he said that he was told by the HSE that there is sufficient stock of the flu vaccine available to cover demand.”

Members of the public have posted comments on the story on our Facebook page telling of their experiences of not being able to avail of the vaccination from either their pharmacists or from their local doctors. Others are saying they are on waiting lists to be contacted for when their GP or pharmacy received the vaccination.

While other people have contacted the Laois Nationalist directly telling of their delays.

Pharmacies are also experiencing long delays in receiving supplies of the vaccination and are coming under pressure from the public.

The Irish Pharmacy Union (IPU) has issued a statement asking its customers to be patient with them because they have not received their vaccine supplies yet.

The IPU said that it “shares the public’s frustration but urged everyone to bear with pharmacies as they manage queries about the availability of the flu vaccine, which is entirely outside of the control of pharmacists.”

The statement said: “Pharmacies are working tirelessly to ensure those in at-risk groups are prioritised to get the vaccine as soon as possible.

Last year there were over 1.1 million flu vaccines delivered in Ireland from mid-late September onwards. This year the HSE increased its procurement, but there has been a significant delay in deliveries due to global supply issues.”

IPU Secretary General Darragh O’Loughlin said: “We recognise this is a challenging environment for the HSE to operate in. There are global supply issues that are well publicised, and we know from our pharmacy colleagues abroad that these problems are having an impact all across Europe and further afield. Unfortunately, it is still not clear when or if these supply issues will be fully resolved.

“This year has seen a huge increase in requests for flu vaccination, which is encouraging, except that many pharmacies and GPs are unable to procure enough vaccines. The fact that we can’t tell patients exactly when we will have vaccines available is leading to huge amounts of uncertainty and frustration, with people fed up of having their appointments rescheduled or cancelled due to the shortage of vaccines. This has serious potential to undermine this year’s vaccination programme, the one year when we need it most. It is disheartening to all those involved that ongoing vaccine shortages are stymieing the service and information remains elusive.”

Mr O’Loughlin called on the public to, “be patient with their pharmacist who is making every effort possible to accommodate anyone who requires a flu vaccination and remember the pharmacist has absolutely no control over the delivery and supply of vaccines. Vaccines made available by the HSE are targeted at patients in the at-risk categories. We are hopeful, but not confident, that additional supplies will soon be made available for private patients”

Mr O’Loughlin concluded by saying, “We want the public to know that pharmacies are doing their very best to support them in getting their flu vaccine this year and ask for the public’s forbearance over the coming weeks.”