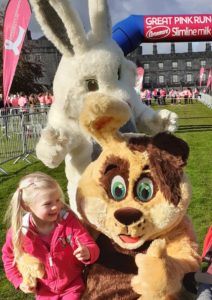 A TEAM of Laois mothers and daughters will turn Spink pink this weekend, with a 10km relay in aid of breast cancer support.

‘Spink runs Pink’ will see five young friends and their mothers tog out for their own ‘Great Pink Run’ on Sunday.

Knock NS pupil Lyia Miller (6) will be joined by four six-year-old friends at the socially distanced event, which will start in Spink community field at 10.30am.

All their mums will try to keep up with the lively schoolgirls, with each pair of mothers and daughters running together.

The event is particularly special to Lyia’s mum Alison, who was only five when she sadly lost her own mother to breast cancer.

Alison explains: “For the past two years, I have jogged the Breast Cancer Ireland Great Pink Run in Kilkenny. Last year, the whole family did it with my two-year-old in a buggy.

“Lyia was five when we did the run last year, the same age as I was when my mother died, so it meant a lot to me to do it with my five-year-old daughter by my side.”

Because of Covid-19, the annual national Great Pink Run is being held virtually this year. The Spink mothers and daughters decided to organise a local relay instead. There will even be some socially distanced pink refreshments after the event. 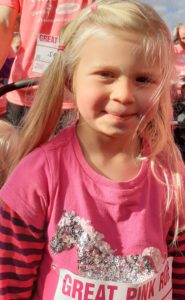