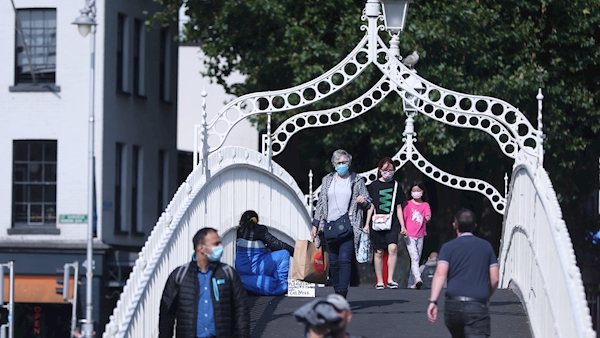 There have been eight new deaths and 1,276 new cases of coronavirus confirmed in the State this evening.

Of the eight deaths related to Covid-19 confirmed today, one occurred in June, two in September and five in October. There has now been a total of 1,849 Covid-19 related deaths in Ireland.

Of the cases notified today, 69 per cent are under 45 years of age, with a median age of 31 years old.

A crucial meeting is currently underway in Dublin between senior Government members and public health officials as they prepare a decision on moving the country to Level 5 Covid-19 restrictions.

The National Public Health Emergency Team (Nphet) has recommended that every county move to Level 5 restrictions for six weeks to regain control of the disease, which would mean everyone must stay within 5 kilometres of their home.

Yesterday saw 1,000 further positive cases of Covid-19 confirmed in the State in the third day in a row that new confirmed cases have hit four figures. There are 260 patients being treated for the disease in hospital today, with 30 in intensive care.

Confusion has surrounded new “circuit breaker” lockdown restrictions in Northern Ireland which came into force yesterday evening, as fans turned up for a premiership clash in Coleraine Showgrounds.

A further 1,031 cases and two deaths related to the virus have been confirmed in the region in the last 24-hour reporting period.

With the Republic’s highest figure of daily cases since the pandemic began announced on Thursday, multiple other European countries have reported record daily totals of Covid-19 cases this week as a second wave sweeps across the continent.

In Italy, the figure has exceeded 10,000 for the first time, while Germany announced a new daily record of over 7,300 new cases yesterday.

A four-week night time curfew is also in place in France, as over 55,000 cases have been confirmed there since Thursday.