Farewell to the infamous Arles bends 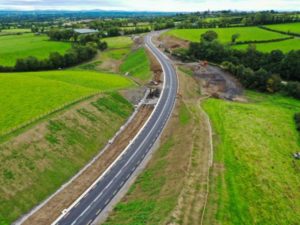 A section of the new road in the Maidenhead Realignment Scheme, which has replaced the infamous Arles bends. Photo by construction firm Clonmel Enterprises Ltd

MADDENED motorists have said farewell at last to the notorious Arles bends.

After countless years of planning, a €4.3 million road-straightening project has finally been completed.

The magnificently straight route has opened to traffic, replacing the infamous accident black spot that was among the worst roads in the country.

The Maidenhead Realignment Scheme bypassed the bends with construction of a straight 2km stretch of road on the N80 between Stradbally and Carlow, about a kilometre from Arles village.

After 18 months of construction, minor finishing works have been completed and the new stretch of road has finally opened to traffic.

The new section stretches from the townland of Ballynagall to the townland of Castletown, passing through the townlands of Maidenhead, Coolanowle and Kilcruise. Construction was carried out by Clonmel Enterprises Ltd, based in Naas Co Kildare.