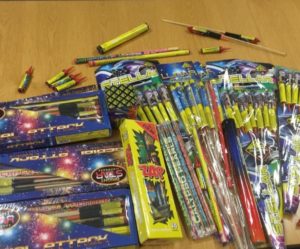 Some of the illegal fireworks seized in Mountmellick

A LARGE quantity of illegal fireworks has been seized by gardaí during searches in Mountmellick.

Gardaí said yesterday that a number of searches were carried out in the area, as part of an operation to tackle anti-social behaviour and illegal sale of fireworks in the town.

The successful searches followed similar seizures of a variety of fireworks in Portlaoise during the week.

In the run-up to Halloween, there have been ongoing complaints from residents about the regular use of fireworks across Laois, particularly in Mountmellick, Porlaoise and Portarlington.

The ongoing searches are being carried out as part of the Operation Tombola garda campaign, which is targeting the sale and purchase of illegal fireworks nationwide.