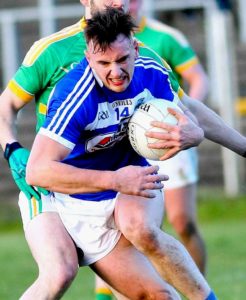 Gary Walsh top scored for Laois against Westmeath on Saturday

Laois never got off the ground this afternoon in Mullingar and now face a fiercely difficult trip to Enniskillen in a bid to stave off relegation, following Westmeath’s 1-18 to 0-13 win over the O’Moore County at TEG Park.

An injury to Colm Begley in the warm up, meaning that Seán O’Flynn had to step into the half back line, was an early blow to Mike Quirke and his panel – but there was so much to their problems than personnel in the early stages as Westmeath exploded out of the blocks with a deceptively strong breeze at their backs.

John Heslin, lining out at centre forward, didn’t hesitate to use that assistance as he fired over a series of points from distance.

Ronan O’Toole, Kieran Martin and Lorcan Dolan all chipped in as the first seven scores of the game all went Westmeath’s way, with their half back line causing havoc by moving forward and creating overlaps in the attack.

Despite missing a glorious early goal chance when Mark Barry fired at the feet of Westmeath keeper Jason Daly, Laois gradually worked their way back into the contest with a series of frees and once Niall Corbet stroked a glorious kick over from the 45m line to make it 0-8 to 0-4, they would have been relatively content with their position.

Instead Westmeath found another vein of form before the interval and pushed their lead out to 0-12 to 0-5, inspired by two sublime scores from Athlone player and former AFL footballer Ray Connellan.

Mike Quirke needed a strong start from his players after half time but instead the third quarter was a scrappy affair, with plenty of stoppages that negated any sign of momentum. Westmeath continued to pose a threat on the break while the Laois forward line struggled to make any impact – as evidenced by Quirke’s decision to replace five of his starting six attackers by the end of the game.

Laois were still eight points adrift with seven minutes to play when Westmeath opened up their defence and set up Jamie Gonoud for a tap in score, and while a series of late frees from Gary Walsh brought the margin back down to single figures, it couldn’t mask the gulf in class between these midland rivals.