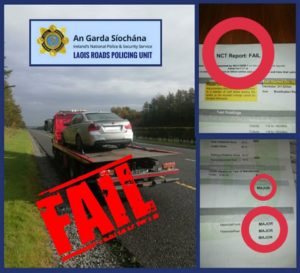 A CAR recorded doing 182kph in Laois today had failed the NCT because of major brake defects.

The dangerous car was seized and towed away, after the driver was caught by the Laois Roads Policing Unit.

Gardaí pursued and pulled in the driver on the M7 motorway, after a radar speed detector recorded 182kph – 62kph above the speed limit.

A check on the Garda Mobility App revealed that the BMW saloon recently failed the NCT, due to major faults with its braking system.

The driver also had no tax or insurance and was arrested at the scene.

The vehicle has been seized for a PSV examination and the driver is heading to court for a litany of traffic offences.