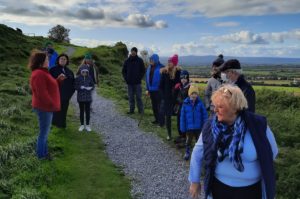 The group pictured on the Rock of Dunamase, with tour guide Trudy Carmody

LAOIS Public Participation Network (LPPN) continued its outdoor promotion of local attractions with a recent tour of the Rock of Dunamase. It was led by Experiencing Ireland CEO and tour guide Trudy Carmody.

More than a dozen people attended ‘A ramble at the Rock’, which was organised by Dan Bergin of LPPN and Catherine Casey from Laois County Council’s heritage department.

Mr Bergin said: “The Rock of Dunamase is one of the iconic heritage sites in Laois. It’s very well known from a landscape point of view and by people passing, but they mightn’t know the rich history and importance of this attraction.”

Outlining the Rock’s history in great detail, Ms Carmody said: “The first mention of the Rock of Dunamase was in 120 AD, when Greek cartographer Ptolemy first mapped Ireland. In the centre of that map, the Rock is referred to as ‘dunum’.

“Try to picture what it would have been like trying to attack or take the Rock under siege in the 12th or 13th century during its heyday. It was a fort or a stronghold 1,900 years ago but wouldn’t have been what we see now. It may have been a wooden fort, but a fortress nonetheless.

“In the main hall there was always a fire going, with a pig on the spit being turned by children for up to 12 hours at a time. There were two rules: they couldn’t leave and they couldn’t pee too close to the fire,” she said.

The tour lasted 90 minutes and various medieval features used in constructing the Rock were pointed out, including the huge holes for hinges on the outer barbican gates, the murder hole above the main entrance, where heavy objects could be dropped down on enemies and its strategic arrow-slit windows.

The talk included the Vikings’ occupation in 833 AD and the Anglo-Norman invasion of 1169, when king of Leinster Diarmuid MacMurrough gifted the Rock to Aoife and Strongbow. But by the 16th century it was part of the land of the O’More family.

A 3D model of the Rock of Dunamase is on display at Heritage House, Abbeyleix.

More than 600 groups are part of LPPN. Other groups can join by emailing www.lppn.ie.