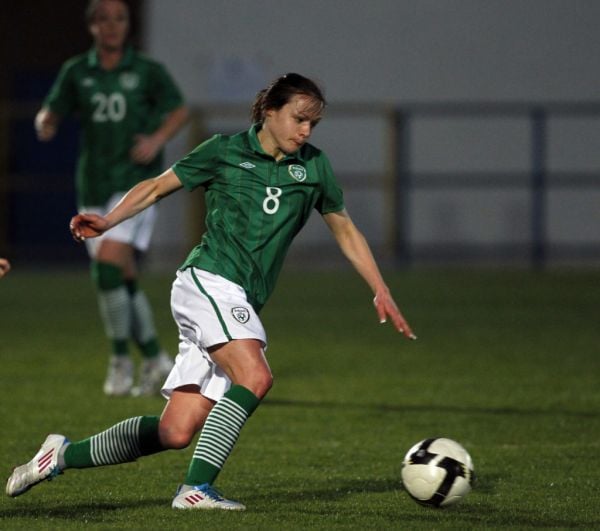 By Press Association and FAI Media

A first-half own goal from Aine O’Gorman saw the Republic of Ireland slip to a 1-0 defeat to Ukraine in their Euro 2022 qualifier in Kiev.

The result at the Obolon Arena cost the Republic the chance to seal a play-off place and they are now likely to have to beat group leaders Germany in their final match to give themselves hope of second place.

The Republic dominated much of the game and registered 13 attempts on goal, but failed to make the most of their chances.

Constant waves of Irish pressure kept Ukraine inside their own half for the majority of the time.

However, Ukraine took the lead when O’Gorman found herself under pressure and attempted to play the ball back to goalkeeper Courtney Brosnan, with the ball bypassing her into the net.

Republic of Ireland WNT manager Vera Pauw said her side was the better team but ran out of time without a much-needed score.

“At half-time, we said that we have 45 minutes to get one goal so don’t rush and make sure to keep your structure,” she said.

“In the first half, we completely dominated so the plan was the play the same way but time went ticking and there was hardly any time left to get that goal.

“We had a game-plan that we had planned for all of the different scenarios and we were handling the game well, albeit without scoring. I think everyone could see that we were the better team but the ball just would not go in for us.”

Ireland earned a 33rd-minute penalty after Denise O’Sullivan was brought down, but the effort by captain Katie McCab crashed back off the crossbar.

Pauw’s team kept pressing in search of a goal that almost came just before the interval when Rianna Jarrett met a pass from Heather Payne, but the ball was cleared before it could cross the line.

Ukraine hung on to collect the three points and deal Ireland’s qualifying hopes a blow with one game remaining, at home to group leaders Germany on December 1st.

“We know what we need against Germany so we will sit down and come up with a game-plan. We know how good they are and how difficult it will be against them, but we have to plan for that once we move past this game,” Republic manager Pauw said.