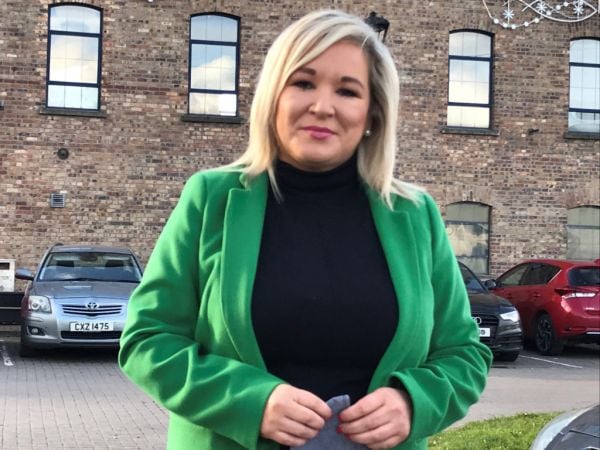 Northern Ireland’s Deputy First Minister has warned that a potential extension of the region’s four-week circuit-break lockdown cannot be taken off the table.

Michelle O’Neill, in her first public appearance since coming out of 14 days of self-isolation, said she hoped the Covid-19 virus could be sufficiently suppressed so as to allow restrictions to be lifted on November 13th.

However, she made clear that relaxing the measures on that date was not a definite commitment.

“I am very open and honest about the fact that we’re in a very challenging situation,” said Ms O’Neill.

“And I believe that everything has to remain on the table. I don’t want us to have to impose further restrictions. I hope we can avoid that.

“I think if everybody works really hard at the measures we’ve brought into place now in this intervention then we possibly can avoid that. I want us to be able to avoid that. But I’m honest enough to be able to say that all these things have to remain on the table.”

Isolation is difficult for individuals and families, but we all must play our part in this battle against COVID

Let’s overcome this virus together! pic.twitter.com/iEe26bt8As

Ms O’Neill’s comments came in contrast to those of First Minister Arlene Foster who has insisted the circuit-breaker will not extend beyond four weeks.

Health minister Robin Swann also expressed hope that the region was starting to “turn the corner” on the second wave of the virus.

On Friday, Northern Ireland came to the end of its first week of a four-week circuit-breaker.

Pubs and restaurants are closed except for takeaway and deliveries, while schools are shut for a fortnight.

There were five further coronavirus-linked deaths and 1,252 new cases of the virus announced on Friday.

The death toll recorded by the department now stands at 639. There are currently 296 patients with Covid-19 being treated in hospital with 34 in intensive care.

Sinn Féin vice president Ms O’Neill, who had to isolate after a family member tested positive for Covid-19, said the Executive needed to avoid a cycle of lockdowns.

She insisted the Executive’s key priority was to reopen the schools on November 2nd but did not give a definite commitment that this would happen, highlighting that the measure would be reviewed next week.

“I think that what we want to see at the end of next week is an assessment from the public health team again to let us know where they think things sit,” she said.

“And then we’ve built in a review into the executive decision making. But it’s all of our intention to have children return to school at the end of the holiday period.”

Ms O’Neill indicated the Executive may find itself having to close down other sections of society or the economy in order to keep schools open.