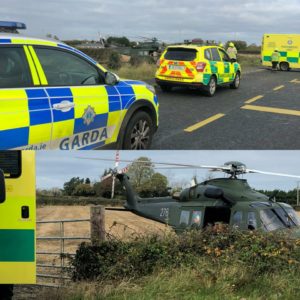 The collision on the Abbeyleix Road near Portlaoise was attended by the Laois Fire and Rescue Service, the National Ambulance Service and the Army Air Corps, together with a regular garda unit and the Laois Roads Policing Unit.

One person was airlifted to hospital by army helicopter, following the crash between a van and a lorry on the N77 near the Togher roundabout. Fortunately, the injuries are not believed to be life-threatening.

Paying tribute to all the emergency crews, Laois gardaí said the scene was an example of frontline workers working together.

The lorry driver was arrested and charged following the crash that happened at about 10am.

Gardaí are still appealing for witnesses, particularly those with dashcam footage, to contact Portlaoise Garda Station on 057 8674100.