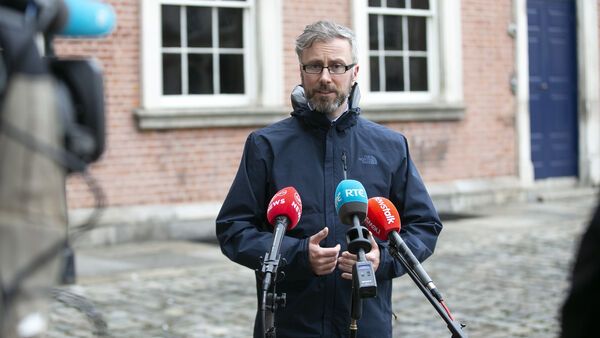 The Government has contravened European and Irish law with regard to the accessibility of personal data by voting to seal the records of mother and baby homes for thirty years, according to the Data Protection Commission (DPC).

The DPC was consulted by the Department of Children ahead of the drafting of the new mother and baby homes bill, regarding the Data Protection Impact Assessment it had commissioned concerning the legislation.

In passing the legislation on Thursday evening, Children’s Minister Roderic O’Gorman said that his advice from the Attorney General was that access to the records had been explicitly restricted by the Commissions of Investigation Act 2004.

However the Irish Examiner has revealed that this is “entirely contrary” to the observations provided to the Department by the DPC.

Apart from a database which is being sent to the child and family agency, Tusla, the records will be sealed for the next three decades.

“The DPC provided a number of observations on the DPIA,” deputy commissioner Graham Doyle said regarding the issue.

He said that the 2018 Data Protection Act, itself drafted in order to enact the EU’s powerful General Data Protection Regulation (GDPR) within Irish law, “explicitly amended” the 2004 Commissions of Investigation Act so that “any restriction on the right to access personal data processed by the Commission can only be implemented ‘to the extent necessary and proportionate to safeguard the effective operation of commissions and the future cooperation of witnesses’”.

“It would appear to the DPC to be the case that the separate provisions of the 2004 Act in relation to the sealing of documents were not intended in the context of the amendment to the 2018 Act to provide an effective ‘blanket’ barrier to the exercise of rights,” Mr Doyle said.

It is understood that the DPC fundamentally disagrees with the Department’s approach with the new legislation.

“The Minister admits that he went back and forth with the Attorney General and that the 2004 Commissions act requires that the records be sealed,” a source with knowledge of the matter said.

“But that act came in 2004 – it predates the EU’s charter on fundamental rights and GDPR and the 2018 data protection act, and where there’s conflict between national and EU legislation, the EU takes primacy,” they said.

“He (Minister O’Gorman) has gotten advice which he feels he has to follow, but he also clearly realises that there’s something wrong,” the source said.

“To be fair to the Department they’re trying to do the right thing, but are afflicted by having done such a bad job on communications. They have to legislate to ensure that the Commission doesn’t redact the information within the records. Really, the question is how the whole thing was left so late.”

The Commission on mother and baby homes will dissolve at the end of October, which has precipitated the need to pass legislation within the Oireachtas regarding the records.

Earlier, Minister O’Gorman said he “deeply regrets” his failure to properly communicate with the survivors of Mother and Baby homes on the new laws which will seal their records for 30 years.

He admitted that the controversial Bill, which was voted through the Dail by the three Government parties on Thursday evening, has caused “anxiety”.

Mr O’Gorman said he will now consult with survivor groups and academic experts after the Bill sparked fury among opposition TDs and former mother and baby home residents.

The Minister’s decision not to accept opposition amendments to the controversial bill drew particular scorn from the opposition, with Holly Cairns, the Cork South West Social Democrats TD describing the action as “sickening”.

Opposition TDs had hoped to allow survivors of the system decide via those amendments whether their names and testimony should be disclosed.

Family of Tipperary woman killed in crash settles case for €550,000

Gardaí appeal for information after cyclist killed in Tipperary collision