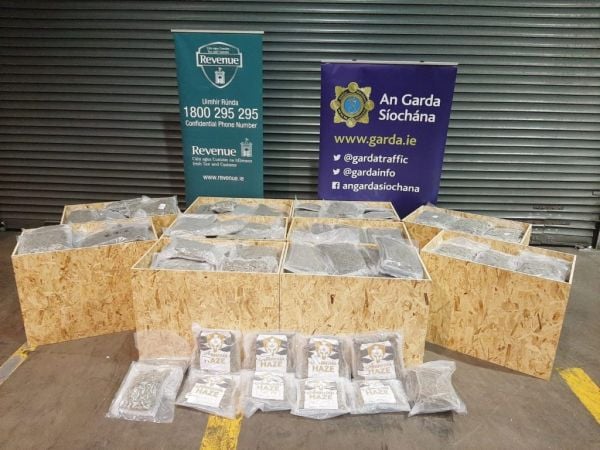 Herbal cannabis with an estimated value in excess of €7 million was seized today in a joint operation between gardaí and Revenue Customs officers.

352 kilograms of the illegal drugs arrived in a container from Spain through Dublin Port.

The seizure took place as part of “routine profiling” with searches continuing throughout the afternoon.

Three men aged 31, 47 and 49, were later arrested by gardaí and are currently detained under section 2 of the Criminal Justice (Drug Trafficking Act) 1996 at Garda stations in Dublin.

Herbal cannabis in excess of €7 million has been seized in a joint operation between Gardaí attached to the GNDOCB and Revenue Customs Officers earlier today.

The illegal drugs arrived in a container from Spain through Dublin Port. Three men have been arrested. pic.twitter.com/jAVpB2tx8B

Revenue said that the “collaboration between both agencies as well as international colleagues was significant in the successful outcome of this operation.”

The organisations said if businesses or members of the public have information regarding drug smuggling, they can contact Revenue in confidence on Confidential Phone Number 1800 295 295 or the Garda Confidential Line on 1800 666 111.