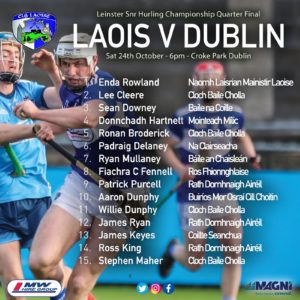 Eddie Brennan has made seven changes, including three debutants, from the side that recorded that magnificent win over Dublin in last year’s championship for today’s round one rematch in Croke Park (6pm).

Missing from the team that great win last year are defenders Matthew Whelan, Joe Phelan and Jack Kelly, John Lennon in the middle of the field while up front Mark Kavanagh, Eanna Lyons and Cha Dwyer will be missing.