When silence was not golden 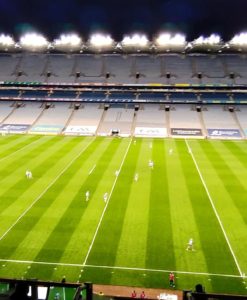 A LITTLE over 14 months ago Laois hurlers had two of their most memorable days in recent years. Their supporters raised the roof in Croke Park when they beat Westmeath in the Joe McDonagh Cup final in early July. A week later there were equally vociferous celebrations in O’Moore Park when Laois saw off Dublin in the All-Ireland qualifiers.

There was to be no repeat of those scenes on Saturday evening in Croke Park, for two very differing reasons. Firstly, Laois lost to the Dubs this time around and then there were the Covid-19 restrictions.

As one of the 12 or 14 supporters – or should I say journalists – in Croke Park on Saturday the one abiding memory I took away with me came at the final whistle. In normal times that blast from the referee’s whistle it greeted with tumultuous applause and cheering from the winning supporters.

Over the course of the game the stands echoed to the roars and shouts of the players, the substitutes and the team mentors, now the players just shook hands and the sideline contingent just stood around waiting for the players to come off the pitch.

It was just plain eerie. But then the whole evening was.

Even walking down Clonliffe Road it was patently obvious that things were not normal. Here we were on the evening of a Leinster hurling championship game, one in which Dublin were playing, yet there were no roads blocked off, no gardaí or stewards keeping an eye on things, in fact there was practically no one around.

And then you turn the corner onto Jones Road, surely there would be a few gathered outside Croker, but sure I forgot, it’s Covid time and life as we know it has changed, or as Yeats might have said, ‘all changed, changed utterly, a terrible beauty is born’.

But what about the hurling, well, Dublin deserved to win while Laois manger Eddie Brennan can take some solace from the never say die attitude of his players.

However, the fact is that Laois never looked like winning. Even before Donal Burke struck for Dublin’s first goal late in the first half they were sharper, more physical, always more alert. Laois would stick with them and even staging a bit of a rally in the second half closing an 11 point gap down to six points, but never threatening to overtake Dublin.

Laois now have three weeks to prepare for the All-Ireland qualifiers and that will allow Brennan to address some of his team’s shortcomings.

Dublin scored two goals on Saturday, granted the second coming with the virtual last puck of the game, but they might have had another couple. In stark contrast Laois never once threatened to raise a green flag. That is something Brennan will need to address before Laois take to the field again.

He must also be concerned that at times Dublin player basically made their way through the Laois defence unchallenged. For his goal Donal Burke ran 40 metres with out being challenged while for his goal Eamon Dillon easily won the sliotar from over a Laois defender, then comfortably rounded him to blast to the net.

But it is not all doom and gloom, the Laois players did display courage and pride and that gives the manager something to build on, and also we saw the welcome return of Mark Kavanagh to action. With another three weeks training under his belt he could be a force by the next game.