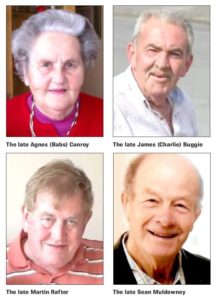 THE death on Sunday 25 October of Martin Rafter, The Hermitage, Borris Road, Portlaoise, formerly of Coolnacart and St Brigid’s Place, Portlaoise who passed away following an illness.

Martin was an employee of Odlum’s Mills for many years and in his youth was a gifted hurler. In 1959 he wore the number one shirt when Portlaoise beat Rathdowney in the minor final captained by Mick Early. Twelve months later he was again in goal when Portlaoise defended their title under the captaincy of Teddy Fennelly against Mountrath. In a cliff hanger Martin denied Mountrath a late goal as he collected his second medal but for some reason he decided to call it a day.

Cullohill and the Harps lost a member of a great Cullohill family with the death of Sean Muldowney, brother of the late Gabriel (Gabby) a star of the 1964 success with Cullohill and who lined out with Laois, on Wednesday 28 October.

Owing to Covid restrictions a private family funeral took place on Friday 30 October in the St Tiarnach’s Church, Cullohill followed by burial in the adjoining cemetery.

Sympathy is extended to the Conroy family Durrow on the passing of their mother Agnes formerly, Threecastles, Kilkenny but who resided in Mary Street, Durrow over many years

Beloved wife of the late Sean, Agnes, who passed away on Thursday 29 October is mourned by her family Ann, Margaret, Sean, Una, Mary and Ger, daughters-in-law, sons-in-law, grandchildren, great grandchildren, nieces, nephews, relatives and many friends and neighbours in Durrow and Three castles.

Her oldest son, Sean is a member of the teaching staff in St Fergal’s College, Rathdowney and has been involved with The Harps over many years and produced a 30 year history of the club in recent time. This year he is a member of the Laois under-20 hurling backroom team.

He was a member of the first Harps hurling team to capture junior hurling honours in Centenary year and alongside him was Martin Bergin of Attanagh who was recently bereaved by the tragic death of his son Eoin.

Eoin died on Monday 19 October and his Requiem Mass was celebrated in the Church of the Assumption, Ballyouskill on Thursday 22 October followed by internment in the adjoining cemetery.

Eoin is mourned by his heartbroken parents Martin and Noreen, his brother Liam and sister Aisling, grandparents, uncles, aunts, sister-in-law Laura, niece, nephew, relatives, neighbours and many sporting friends on either side of the Kilkenny border.

The sudden death of Jim (Charlie) Buggie, Garrons, Stradbally on Wednesday 21 October at his home surrounded by his adoring family caused widespread sadness in his native parish and far beyond.

Son of Martin and Elizabeth, Charlie was a member of the Irish Defence Forces for many years and served mainly in Cork. He later joined his brother Noel in the Irish Prison Service and spent many years stationed in Portlaoise until he retired about six years ago.

The two immersed themselves in sport and Noel, who passed away a few years ago, played in goal with Stradbally and lined out with Laois in the National League.

Charlie was involved with Stradbally Town AFC and more recently with Stradbally Utd FC but it was another United across the water in Manchester that he adored all during his adult life.

He took up junior soccer refereeing and stood by his every decision. His two sons James and Stephen who followed in his footsteps and is the current Stradbally club secretary.

Reposal was at his home and removal was to the Church of the Sacred Heart, Stradbally on Saturday 24 October for Requiem Mass followed by internment in Oakvale Cemetery.

Owing to Covid restrictions the funeral was private but many neighbours and sporting colleagues as well as former colleagues in the Irish Army and the Prison Service formed a guard of honour to a much respected colleague.

Pre-deceased by his brothers Noel and Joe, Charlie is mourned by his wife Marian, son James and his partner Sharon, daughter Anita and her husband Vinny, Catherine and her partner John, Stephen and his partner Ann, six grandchildren, brothers Martin and Dan, sister Margaret, aunts, nieces, nephews, extended family, neighbours and former colleagues in the Irish Army and the Prison service.