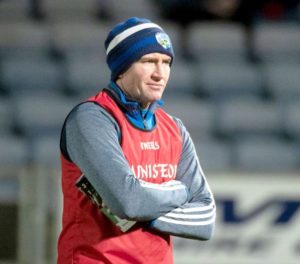 LAOIS fell agonisingly short of recording a remarkable upset this afternoon in UPMC Nowlan Park, as the clock ran out on their late surge against Clare in the first round of this year’s All-Ireland championship qualifiers.

Clare always looked to have more scoring power and despite not hitting the Laois net at any stage, they led by seven points on to separate occasions – once at half time, and again with 15 minutes to play. However they were operating with one man short following David McInerney’s first half dismissal, and once Laois shot their third goal through Aaron Dunphy, the stage was set for a dramatic late surge.

Points followed from Padraig Delaney, Paddy Purcell and a Mark Kavanagh free, but the question will be asked if possibly the Rathdowney-Errill sharpshooter should have gone for goal with his short from 30 metres out, as the game was in the final minute of stoppage time. Clare won the subsequent puckout and by the time Laois regained possession, time was up and a glorious chance for a memorable upset was lost.

Laois will also look back with regret at the way they lost their way in the first half. Having fallen 0-3 to 0-1 behind early on, Ross King’s ground pull goal edged them in front after 5 minutes. At the 20 minute mark they were still level, but Clare shot eight of the next nine points to establish a commanding lead, and it could have been so much more was it not for two stunning saves from Enda Rowland in one-on-one situations against Shane O’Donnell.

Even with McInerney sent off, 0-16 to 1-6 at half time suggested a comfortable second half for the Munster county, but a brilliant run and finish from James Keyes rattled the net for the first score of the second half.

Some great scores from Aaron Shanagher, Tony Kelly and Cathal Malone restored Clare’s dominance, but in the absence of being able to score a goal, they left Laois in the game. Doing so almost cost them dearly.