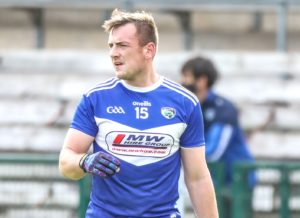 Once again Gary Walsh was Laois’s top scorer in the defeat of Longford           Photo: Paul Dargan

LAOIS advanced to a Leinster senior football championship semi-final meeting with Dublin but not before they were put to the in of their collars by a resolute Longford in Pearse Park today.

In fact it was the home side that looked the more likely to advance after a first half which they generally controlled but couldn’t quite shake of Laois.

A sixth minute goal from Dessie Reynolds had Longford in the driving seat and, while Laois mounted a mini comeback, that was the score which was to separate the sides at half time after Paul Kingston score a goal at the mid-point of the half.

And it got worse on the restart with Longford scoring the first two points of the new half but amazingly they would go almost 20 minutes without adding to their tally.

Much of that had to do with the fact that Laois began to get a grip with Longford in the middle of the park. Also, Mike Quirke introduced Michael Keogh, Ross Munnelly and Sean O’Flynn which also improved matters with all three getting on the score sheet.

Longford eventually found their shooting feet and levelled with five minutes of normal time remaining, but that was t be it for them.

Gary Walsh’s eighth point edged Laois back in front in the 69th minute and while Longford did mange to launch another couple of attacks, the last score of the game fell to substitute Sean O’Flynn in the 77th minute.

So now it’s off to Croke Park next Sunday for a meeting with Dublin who comfortable saw off the Westmeath challenge on Saturday.

Full report with comment and reaction in Tuesday’s Laois Nationalist