Huge support for family made homeless by fire 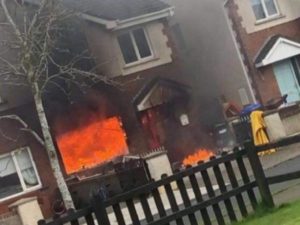 The devastating fire in Mountmellick

A LAOIS nurse who lost her home in a devastating house fire has thanked the Mountmellick community for their extraordinary support.

Mother-of-five Sylvia Mooney-Tormey says she is overwhelmed by the kindness of the entire local community, which has rallied around the family following their terrible ordeal.

She said that incredible support has come from everyone, including neighbours, friends, local residents, businesses, family members and the Mountmellick Central Hub.

A psychiatric nurse, Sylvia told the Laois Nationalist: “People have been so good to us and I will never be able to thank them enough.”

A gofundme account, set up by Sylvia’s sister-in-law Grace Mooney, raised more than €13,000 within days, as countless people came forward with donations and messages of support.

The fire broke out at lunchtime on Friday at the house in Silverwood, which Sylvia shares with her two youngest teenage daughters. They lost everything in the blaze and had to move into a hotel, as the house was severely damaged.

Fortunately, no one was injured but a beloved pet dog sadly died in the blaze. Sylvia’s partner Edmund Breen, who does not live in the house, was there at the time and one of her children was upstairs but thankfully they both managed to escape.

There was an outpouring of goodwill for the family, with just over €13,300 donated to the gofundme account.

The fire was extremely upsetting for all the family, including Sylvia’s ex-husband and their five children. The exceptional support of the local community has made all the difference as they try to recover from their ordeal.

** We wish to apologise to Sylvia and her family for incorrect details that were published in the print edition of the Laois Nationalist on Tuesday 17 November and online. We greatly regret the further upset these errors caused to the family.