Letter to the editor – Good riddance to fur farming 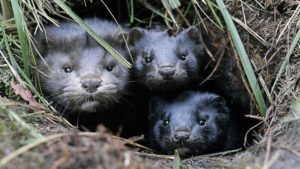 While saddened by the prospect of a mink cull to prevent a worsening of the Covid 19 Pandemic, I welcome the fact that this will hasten the demise of a cruel practise that should have been banned decades ago.

Mink are not native to Ireland, and belong in the wide open countryside and the waterways; not cooped up in cages waiting to be dragged out after a few miserable months of confinement to be gassed.

Fur farming is one of those activities that have fallen victim to Covid 19 and it won’t be missed by anyone with even a scintilla of compassion for animals. Another should be hare coursing. Already, the season has been suspended until December 1st and more than 1,200 hares have been released from captivity in coursing compounds nationwide.

Those of us campaigning for wildlife protection believe that coursing should go the way of fur farming. The hare is a solitary creature, unaccustomed to the conditions it finds itself in once captured: confined for several weeks in a paddock or compound with dozens of other hares. Captivity is itself deeply stressful and unnatural for the animal, and hares can literally die of fright when faced with aggressive manhandling by humans.

They don’t belong in cages, large or small, and being chased by dogs in a contrived environment with hundreds of howling gamblers gathered around is far removed from its natural setting, despite idiotic claims that this activity resonates with the workings of nature.

Conservationists have dubbed our native hare the flagship of Irish biodiversity. It is one of our truly endemic mammals, a sub-species of the Mountain Hare unique to Ireland and a survivor of the last Ice Age of 10,000 years ago that may been around for eons of time before that.

Having braved millennia of human and animal predation, and loss of habitat resulting from urbanisation and the downside of modern agriculture, this great survivor finds itself at the butt end of this joke that calls itself a sport.

Hare coursing had no place in the 18th century let alone the 21st. It should now follow fur farming into the dustbin of history.