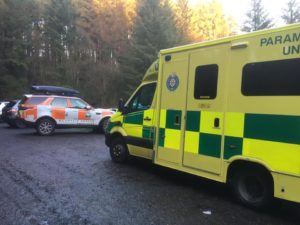 Emergency vehicles at the scene in the Slieve Blooms today

EMERGENCY crews came to the rescue of an 85-year-old man today, after he collapsed while walking in the Slieve Blooms.

Gardaí and other services responded to an emergency call at about 2.30pm, when the man got into difficulties while out walking with his family.

The incident happened at the Monicknew Wood forest walk and recreational area, part of the Slieve Bloom Environmental Park.

Crews from Laois Fire and Rescue Service, Laois Civil Defence and the National Ambulance Service attended the scene, together with Portlaoise gardaí and the Laois Roads Policing Unit.

The South Eastern Mountain Rescue Association (SEMRA) was also called in by gardaí, to assist with a possible emergency evacuation from the forested area.

The elderly man was treated at the scene by ambulance service paramedics and responded well, to the great relief of his worried family.

After some time, he had sufficiently recovered to be able to walk out to the car park, accompanied by NAS paramedics, SEMRA members and Civil Defence volunteers.

The SEMRA team was stood down at 4pm, following the successful emergency operation.

**This is an update of an earlier post today