Giant wind turbines could be erected throughout Co Laois 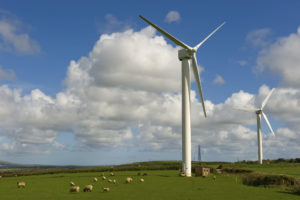 Protest group says project will do untold damage to the environment

FEARS have been expressed in recent days that giant wind turbines could be erected in many parts of Laois.

For the past 11 years, the Ratheniska-Timahoe-Spink (RTS) Substation Action Group has opposed the development of a 400kV sub-power station at Coolnabacca in Ratheniska. The group claims that the Eirgrid/ESB €110 million Laois/Kilkenny Reinforcement Project has plans to connect to wind farms.

The group mounted a round-the-clock blockade at the site for almost two years, which was stood down in 2019.

Over the years, the project has been hugely controversial. Just before a six-day oral hearing in 2013, An Bord Pleanála ruled in favour of the development. Two years later, RTS unsuccessfully appealed that decision in the High Court.

In 2017, EirGrid and ESB Networks were forced to apologise to Laois County Council after they were found to have carried out works on the site without the required planning permission. That disclosure prompted calls from then justice minister Charlie Flanagan for the project to be “abandoned” and that EirGrid/ESB Networks should “pack up their machinery and not come back”.

At that time, deputy Seán Fleming said: “EirGrid now has no option but to walk away from the site, while deputy Brian Stanley stated that EirGrid was “riding roughshod” over the community in Ratheniska.

In the past week, RTS issued a press statement following a local leaflet drop by EirGrid and ESB Networks.

RTS spokesperson Dave Fingleton said that last January his group had met Mark Foley and Pat Doherty, the respective CEOs of Eirgrid and ESB, in the Dáil office of then justice minister Charlie Flanagan. Also present were deputies Fleming and Stanley.

This week, Mr Fingleton said that nine months on from that meeting, after the company said that it would get back to them to discuss the future of the project, “a Dublin-based leaflet distribution company dropped a five-page pamphlet into people’s homes in the area last week.

Read the full story in this week’s Laois Nationalist, on sale now in local stores or online here: http://subscriber.pagesuite.com/subscribe.aspx?source=4&eid=9d7fcc27-f249-4d1a-8c08-36e644d1a153