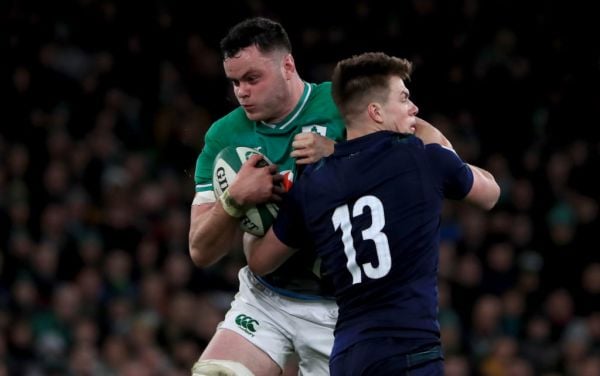 Ireland captain James Ryan says there will be a thorough inquest into the sub-standard display against Georgia but is convinced the team is “going in the right direction”.

The Irish failed to impress as they set up a third-place play-off with Scotland in the Autumn Nations Cup courtesy of an underwhelming 23-10 success over the Lelos.

However, the 24-year-old is adamant his country are building well for the future as an inconsistent first year under Farrell draws to a close.

“We have to be a lot better than that. There’s so much to improve there.

“Look, I’ve no doubt we’re going in the right direction. Even in the games we’ve lost recently, I’ve said the same.

“We know how to fix things and it’s very much in our hands.”

After last weekend’s disappointing loss to England, Ireland registered just three second-half points on Sunday afternoon against a side who had not previously registered a point in the tournament.

Leinster lock Ryan singled out the Irish ruck as a major area for improvement.

He is eager to move swiftly on from the laboured performance and finish 2020 in positive fashion when the Scots visit the Aviva Stadium on Saturday.

“It probably is a good thing in many ways that the turnaround is only six days,” said Ryan.

“We’re going to have to park that and take the lessons from it. It’s great to be able to have the game next week.

“We want to see a top-end performance. It’s a real challenge.

“What we want to see is a performance that we and the country can be proud of. It’s such a good opportunity for us to get those learnings right.

“Scotland are playing some good stuff at the moment, they will back themselves coming to the Aviva. And we’ll see how we react.”

Ryan is likely to relinquish the captain’s armband for the clash with Gregor Townsend’s men as Farrell expects regular skipper Johnny Sexton to be back from a hamstring problem.

Farrell, who has won five and lost three of his eight matches in charge, named an experimental line-up against Georgia, making nine changes to the side defeated at Twickenham.

While clearly annoyed by the performance, the Englishman was non-committal when asked if some of his squad had played themselves out of contention going into next year’s Six Nations.

“I wouldn’t say either way, to be honest,” said Farrell.

“We’ve one more week left in this competition, there are some big games (for the provinces) over Christmas.

“We’ll see how things flow and we’ll make sure that we’ll assess and pick a squad for the Six Nations on the back of that.

“We’ve got to be harsh on ourselves this week and understand the reasons a Georgian side was able to slow us down.”