Laois make three changes for the game against Galway 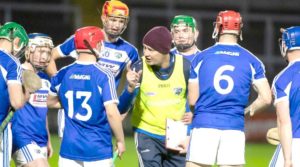 Laois U/20 hurling manager Enda Lyons gets his point across to his players when they played Carlow earlier this year         Photo: Denis Byrne

LAOIS manager Enda Lyons has made three changes to the team that beat Carlow for tonight’s Leinster U/20 hurling championship quarter-final meeting with Galway.

The manager has also made a number of positional changes that sees Enda Parlon moved to full-back from centre-back while Thep Fitzpatrick switches to wing-forward from midfield and Ciaran Byrne to wing-forward to corner-forward.

Laois opened their campaign at home to Carlow and with little preparation held onto a narrow lead after both sides had enjoyed periods of dominance. But facing Galway will be a big step up for Laois. After suffering defeat at senior level to Kilkenny in the Leinster final, Galway will be hurting after beating Tipperary then coming up short against Limerick in the All-Ireland semi-final.

Down the years Galway have produced excellent minor and under-21 teams, and that was before Leinster Council opened the door to them, first at senior level and then they were admitted at under age level. That was a boost to the Tribesmen but has made life difficult for the Leinster counties.

Laois’s record in this grade has been pretty dismal in recent times. You have to go back to 2012 since Laois won more than one game in the provincial championship. That year they beat Dublin and Carlow to make it to the Leinster final where they succumbed to Kilkenny.

Last year Kilkenny showed no mercy when dishing out a 5-21 to 0-10 hammering in the quarter-final played in O’Moore Park.

A year earlier it was a similar story when Dublin comfortably disposed of Laois in the opening round on a 4-16 to 1-10 scoreline.