Masterson brothers to take on the might of Racing 92 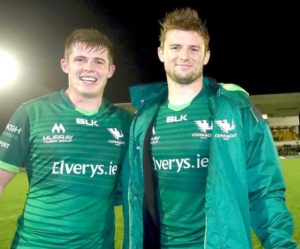 Brothers Sean and Eoghan Masterson who will start for Connacht against Racing 92 on Sunday in the opening round of this season’s Heineken Champion’s Cup Photo: Inpho/James Crombie

WHEN it comes to rugby clubs they don’t come much bigger than Racing 92 and this Sunday Connacht have handed starting positions to brothers Eoin and Sean Masterson for the trip to Paris for the Heineken Cup opener.

This is a huge occasion for the Portlaosie brothers who started their rugby careers with Portlaoise RFC youth’s section. The two have played together before with Connacht but only previously started together.

Eoghan joined Connacht back in 2013 and will be winning his 98th cap on Sunday. He has played most of his games in the back row but on Sunday will take his place in the second row alongside Ultan Dillane.

This is younger brother Sean’s first year as a full professional having graduated from the Connacht Academy. To date he has played five games with the senior team and on Sunday will line out at flanker alongside Jarrad Butler, who will captain the side, and Paul Boyle at number eight.

The game kicks off at 3.15pm on Sunday and can be viewed on BT Sport.