Laois cruise past Carlow into the Leinster semi-final 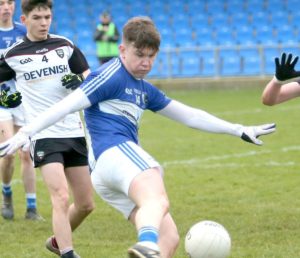 Colin Dunne scored a cracker of a goal against Carlow

Laois started this game like a runaway train. By the fifth minute they were leading by 1-4 to no score, the scores coming in the space of three minutes and goal scored by Conor Heffernan after being placed by Oisin Hooney.

While Laois were the totally dominant side, we had to wait another eight minutes before the next score which was Laois’s second goal. This time Ross Meredith ran at the heart of the Carlow defence and he spotted Colin Dunne who had ghosted in behind the cover. Once the Arles Killen lad took the p[ass he finished clinically to the net in the 12th minute.

Oisin Dillon eventually got Carlow off the mark a minute later and when Conor O’Neill immediately added a second you might have thought there might be a bit of a comeback. But not so.

Laois rattled off pints from Dunne, Kieran O’Donnell, Hooney, and Conor Kelly to go into the break leading 2-8 to 0-2.

The game was effectively over now and the second half turn out to be something of a damp squib with Laois winning convincingly in the end.

What manager Mark Bates will have learned form this game is debatable but he and his team are going to have to be at their best next Saturday when they travel to Navan to take on Meath who hammered Westmeath on Saturday also.