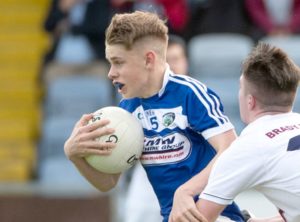 The minor championship was due to commence way in May but the Coronavirus pandemic put paid to that.

The opening round was played in October but both Laois and Carlow had received byes to the quarter-final which will now take place in MW Hire O’Moore Park with throw-in at 12.30pm.

There is no doubt that managers and players will be delighted to get back out onto the pitch but it has been difficult to get back to into the full swing of things.

Other years there would have been competitive leagues and the likes for the minor teams but like so much this year all that went by the wayside. As a consequence, Laois, like Friday’s opponents, Carlow, must played a provincial quarter-final without having played a competitive game in the run up.

Since being appointed manager just over a year ago, Mark Bates has done what he can to prepare this side. The Thomas Davis club man may have been reared in Dublin but has strong roots in Laois. His father Gerry is from Clonaslee.

Prior to being appointed minor manager, Bates took charge of the Laois under-15 team last year when they reached the final of the Adam Mangan Cup where the unfortunately lost to Kerry.

Laois have had relative good fortunes at minor level over the past few years, reaching the semi-finals in 2018 and 2019. Co-incidentally, Laois and Carlow have drawn with each other in those two years.

Last year Ballyroan Abbey’s Brian Whelan displayed nerves of steel to earn Laois a share of the points when he converted a free deep into time added on.

Twelve months earlier Laois trailed by a point at half time and by the 52nd minute were three points in arrears. Astonishingly, Carlow were not to score again while Laois hit three on the trot, the equaliser coming from the boot of Seán Michael Corcoran, again deep in time added on.

And the likelihood it will be no easier for Laois as reports from Carlow suggest they are quietly confident of putting one over their neighbours. Co-incidentally, Carlow are managed by Christy Bolger who this last week was named the Killeshin manager for 2021.

Laois supporters will be able to watch the game on Laois TV, via Leinster GAA.