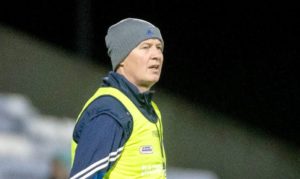 BACKBONED by the 2018 All-Ireland minor championship winning team, Galway travelled to MW Hire O’Moore Park on Friday night as one of the front runners for U/20 hurling honours this year. For a young and inexperienced Laois team to come anywhere close to competing with them would require ideal preparation, and Covid-19 allowed for far less than that – that was the view of Laois manager Enda Lyons as he reflected on a 26-point win for his native county.

“We haven’t trained at all. If there was a rule to be abided by, we abided by it. When we came back this time, we trained three times and then we played Galway. The plan was to play Offaly and to play other challenge games but it didn’t happen,” was his summary of what happened since the second lockdown.

The Ballinasloe native argues that for Laois to compete with these elite counties, more inter-county activity is necessary.

“The level these boys play at, in their league, is way off inter-county so it’s vital that we get either development squads or county panels and play other counties,” Lyons said.

“These boys played Carlow, that’s the only game of hurling these boys played. That’s no preparation for Galway, though it’s nobody’s fault this year. We gave them a bit of a programme to do, they did their best, it is a lonely station to be working on your own. But then we came back in, trained three times, and what happened out there was the result of that because we needed games to sharpen things up.”

“I’d be disappointed obviously, you don’t like losing and not in that fashion, but you have to be realistic. I wouldn’t be nitpicking, we’re not at that level, but we have young lads out there and they got a taste of it today, they probably saw that they’re not a million miles away, just that the mistakes we make are turned over into scores and that’s what happens when you play a quality team.”

Lyons also highlighted how the manner of the defeat will ask questions of these young Laois players, and how comments from his Galway counterpart could open some eyes within his group.

“Realistically, we’d say we started six young lads up front, all underage again next year. We don’t have the strength and conditioning that they’d have. hurling wise, I think we’re fine, but as Jeff (Lynskey, Galway manager) said to them there, if you want to live at this level it’s five or six nights in the gym, five sessions of wall ball, and you make that lifestyle choice or not.

“You can see by those Galway boys, they want to get on to a Galway panel and our lads to get onto Cheddar’s list have to do the same.”

He agreed with the assertion that after a short break for Christmas, it’s likely to be straight back into action for most of these players, either at senior inter-county level or as part of the 2021 U/20 group.

“It looks like it’s going to be county for the first six months of the year. All my six forwards are still underage next year. Johnny Maher was outstanding today and he’s a great kid, I’m sure Cheddar will be looking at him and Joe Phelan, Padraig Dunne as well, those lads are up to the age. Enda Parlon was shocking unlucky, I know Enda, and you get referees like that. A red card is when you try to take somebody out of it, that should be a yellow card because it was a mistake. Enda Parlon didn’t try to behead your man, but referees make those decisions, and (sometimes) they’re wrong.”

He also paid tribute to the resolve and discipline of his players as they stuck to the game plan, never resorting to hit and hope hurling even as Galway piled on the pressure.

“We decided we’d have to work the ball and hold on to the ball. You have to have a game plan and you have to stick with it because you have to give them something to work with. If you hit aimless ball in there, six on six, Galway would eat you. So we tried to work it through the lines, because we have enough skilful hurlers to do it.

“We did it in patches, and the lads realised they could do it, but what happens is that once it breaks down, it’s a score for Galway. That’s the level of those two teams out there, you take your medicine and you either feel sorry for yourself, and go home and sulk, or you go away and better yourself. The boys will go away and make their choices now” he concluded.