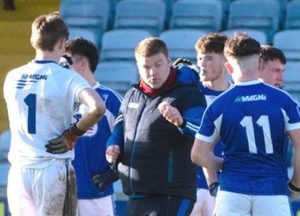 Bates has kept faith in the 15 that started in the defeat of Carlow but has made a number of positional changes.

In defence Josh Hogan moves to the full back line with Darragh Slevin switching to wing back while team captain Simon Fingleton will be on the other wing.

Conor Kelly will combine with Conor Heffernan in midfield.

While the last positional switch sees PJ Ward stationed at full forward and Colin Dunne moving out to centre forward.

It is four years since Laois last reached a provincial minor final when they beat Offaly in the semi-final before losing to Kildare in the decider.

The game in Pairc Tailteann will throw in at 12.30pm and will be available to watch on youtu.be/rvx6TiVlSNI with thanks to @SportTG4.