Only a full-on display will suffice against the Royals 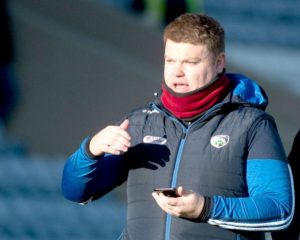 LAOIS minors have the unenviable task of heading to Navan tomorrow to take on Meath in the semi-final of this year’s Leinster championship. I say unenviable because Meath look to be the team to beat in Leinster this year.

The Royals got their campaign off to a start back in October when they shocked everybody not by just beating Dublin but beating them convincingly on a 1-15 to 0-7 scoreline. The U/20 championship was the suspended when the country entered level 5 restrictions.

Now with home advantage again Meath are bound to start favourites on Saturday next. Not only do they have home advantage but also have the advantage of playing a game more than Laois.

One thing Laois will need to do is curb the influence of Ciarán Caulfield who was Meath’s key player as the 2018 Leinster MFC winners moved within an hour of a return to the provincial final.

Wing back Caulfield was man-of-the-match for the Royals against Westmeath on Saturday. He set up Aaron Murphy for Meath’s first goal and played a sublime pass to Ruairí Kinsella for their third goal which finished off Westmeath.

Murphy’s goal was all that stood between the teams at half-time when Meath led by 1-5 to 0-5 though the hosts should have been further ahead.

John McCarthy’s team was more efficient in the second half and outscored Westmeath by 2-6 to 0-2 in that period with goals from Dunshaughlin duo John McDonagh and Kinsella.

Laois players and their manager Mark Bates will be well forewarned of what to expect next Saturday. But one problem for Bates is the fact that Laois so easily accounted for what, in truth, was a very weak Carlow outfit.

Especially given that this was Laois’s first competitive game all year, any manager would like to have seen his players tested to see how they would react under pressure. But now Bates heads to Navan knowing that this will be a severe but uncertain of how his lads will cope.

Certainly Laois played a lovely brand of football in the defeat of Carlow. It is clear Bates is a very good coach but even with this win there are areas that will be of some concern to him.

Laois started the game at full pelt and were a goal and four points to no score ahead inside the opening five minutes. They were not to score for another seven minutes, showing some poor judgement and kicking some poor wides before the outstanding Colin Dunne struck for their second goal in the 12th minute.

They finished the half out strongly adding a further four points to lead by 2-8 to 0-2. On that form they should cruise through the second half.

They cruised alright but not in the manner we might have expected. In the second half they would add just six points to their tally while Carlow added three. Outscoring Carlow two to one was not acceptable and I am sure Bates will let the players know this.

And such lacklustre approach to Meath will be punished and punished severely. Not lapse of concentration can be countenanced on Saturday, only a full scale, full on performance might see off the Royal challenge and win a place in the Leinster final.