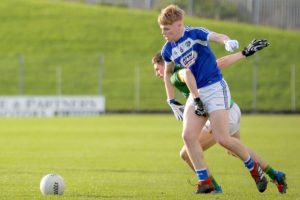 THERE will be no Leinster final for this year’s Laois minors after the failed to match Meath in Navan this afternoon. The Royals were full value for their win but they did fail to really impress.

Laois were punished for a lot of unforced errors and were effectively killed off by two swift goals just after the first half water break.

They did manage to pull a goal back midway through the second half but never seriously threatened to snatch victory from the home side.

Meath got of to the brighter start slotting over two early points but Laois reacted in the best possible way. Three quick points, Colin Dunne with two frees, and the third from Colm Kelly had the O’Moore’s ahead in the ninth minute.

Laois were now in their stride and had started to get their share of ball in the middle of the field. With four points evenly shared the sides were still locked together approaching the water break but when it did come they were level again.

Within minutes of the restart Meath had turned the game on its head with Liam Stafford and Alan Bowden both raising green flags resulting in Meath going into half time leading 2-6 to 0-6.

The home side were totally dominant on the restart and quickly added four points to their tally while Laois’s only response was a Colin Dunne free.

But just before the water break Laois threw themselves a lifeline. From a Sam Krebs’ kick out the ball was worked through the hands of Simon Fingleton and Oisin Hooney to Ciaran O’Donnell and he found the corner of the Meath net.

But that was as good as it would get for Laois as almost unbelievably neither side would manage to clock up another score in the final quarter.