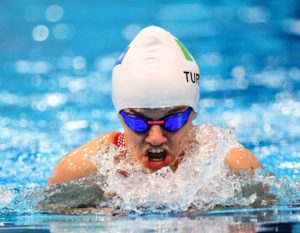 Nicole Turner doing what she does best            Photo: Tino Henschel/Sportsfile

PORTARLINGTON swimmer Nicole Turner (NAC Swim Club) is in the headlines agains after she competed in and won medals at Lebara’s Race The World by British Swimming.

The Rio 2016 Paralympian picked up a first-place finish, this time in 50m Butterfly. Nicole was also fourth in the 50m Freestyle, and fifth in the 100m Breaststroke.

The meet attracted many Paralympic Champions from across the world and was held in a virtual heats and final format, with results being revealed yesterday via livestream.

Lebara’s Race The World was British Para-Swimming’s first virtual international competition, with open heats (3rd-13th November) and finals for the top eight athletes in each event (2nd-9th December). Competitors filmed their swims and recorded a race time between and then uploaded the videos to the organisers.

Hosted by British Para-Swimming, Lebara’s Race The World provided open international competition for athletes from across the world in a virtual format across the heats during November and finals in December. In a year that has seen competitive fixtures absent from the calendar, athletes were able to enter a multi-classification programme in the Lebara’s Race The World competition. The event included both the 50m and 100m distances across freestyle, breaststroke, backstroke and butterfly disciplines, with results to be ranked using the Race The World points system, similar in nature to the World Para Swimming system but catering for all classifications in short-course configuration.