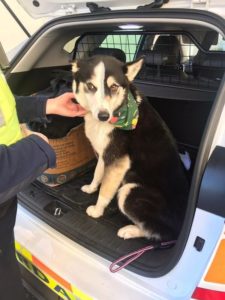 The four-legged suspect taken in by Portlaoise gardaí this morning

PORTLAOISE gardaí are searching for leads, after arresting a four-legged suspect this morning.

The handsome prisoner was taken into custody, after acting suspiciously in the area.

A hunt is underway for the owner of the detainee (pictured), who has remained silent during interviews pending the arrival of a dogged legal team.

Gardaí said: “This beauty is currently at Portlaoise Garda Station distracting us. If you own him, please contact us at 057 8674100.”

The escaped suspect is in perfect condition, so an owner is likely to be missing a cherished pet. Anyone who recognises the dog is asked to contact the station, as gardaí attempt to solve the canine case.

***Evening update: The owner has been found and the suspect has been released without charge, after a formal caution.

Expect it to be bitterly cold in Laois this weekend