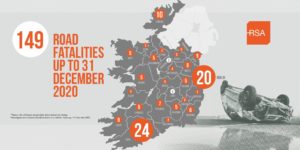 LAOIS is one of only two counties in Ireland that had no road deaths in 2020.

Figures released by the Road Safety Authority (RSA) show that Laois and Longford were the only counties with no fatal traffic accidents last year.

A total of 149 people lost their lives in 138 crashes nationwide, according to the provisional 2020 report from the RSA. The figures are based on An Garda Síochána fatal collision reports up to 5pm on 31 December last.

All counties bordering Laois recorded road deaths last year. There were five in Kilkenny, three in Carlow, four in Offaly, five in Kildare and seven in Tipperary. Cork (24) and Dublin (20) had the highest number of fatal accidents nationwide.

While the number of road deaths rose by nine people or 6%, there were 1,407 fewer serious and minor injury collisions, a 25% decrease on 2019. Six in ten of all fatalities were either drivers or passengers.

The RSA report shows a significant increase in passenger deaths (+ 11) last year compared to 2019, while there were also increases in deaths of pedestrians (+ 5), cyclists (+ 2) and motorcyclists (+ 1).

RSA chairperson Liz O’Donnell said she was saddened by the increase in road deaths, particularly following the two safest years on record for road fatalities in 2018 and 2019.  However, she said that the overall strategy to reduce road trauma is working.

She said: “Between 2013 and 2019, Ireland saw a 26% reduction in road traffic fatalities, compared to just a 6% reduction across the whole of the EU.

“Thanks to the success of the current road safety strategy (2013 – 2020) and the compliance of road users, Ireland is viewed as a leader in road safety and is ranked as second safest in the EU and fourth globally. It is important to acknowledge that many lives have been saved and the next strategy now being prepared will build on this progress.”

Ms O’Donnell said the next Government Road Safety Strategy will be ‘even more challenging’, as it will be committed to ‘Vision Zero’ or zero deaths on Irish roads by 2050. The new strategy will be published in coming months.