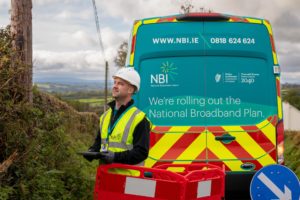 SURVEYING works are underway in Laois for the high-speed fibre national broadband network.

National Broadband Ireland (NBI), the company rolling out the new network under the Government’s National Broadband Plan (NBP), has announced that surveying works in several areas of Laois are ‘well underway’.

According to NBI, almost one-third of properties in the county do not have adequate broadband speeds and they will be covered by the network.

In a statement this afternoon, NBI said the fibre network will be connected to every premises in the ‘Intervention Area (IA)’, a map of over 544,000 premises nationwide that have inadequate broadband speeds.

Laois has 12,510 properties in the IA, which is 31% of all premises in the county and includes homes, farms, businesses and schools.

According to NBI, €49m will be invested in the new high-speed fibre network in Laois alone. This will enable e-learning, remote monitoring of livestock or equipment, e-health initiatives, better energy efficiency in the home and increased levels of remote working.

All NBI contractors will carry official ID cards and essential worker letters and have received training on meeting all Covid-19 guidelines. They will have vehicles, PPE and signage, with both their own and NBI logos.

The company says that NBI contractors have been on the ground nationwide for eight months, with over 150,000 premises nationwide surveyed so far.

The surveys involve physically walking the routes and documenting images, notes and measurements of the poles, cables and underground ducts in each area. This will enable network design solutions for the provision of a fibre network to every premises in the IA.

In advance of the fibre rollout to homes, the NBP provides for Broadband Connection Points (BCPs) nationwide. Over 60 of these sites are already ‘live’ and have both internal and external broadband access.

The BCPs, which include GAA clubs, community centres and tourist sites, will provide free public access to high-speed internet in the rollout area.

These will pave the way for rural communities to receive the benefits of broadband, from mobile working, e-learning and mobile banking, to digital tourism. A full list can be found at /bcp-map/ .

Primary schools in the IA are also being connected for educational access, as part of the NBP. Locations of BCPs in Laois will include Vicarstown Community Centre, Emo Community Centre, Oisin House in Rossmore and Bilboa Post Office.

According to Mountmellick man Pat O’Toole, who is NBP deployment director, many Laois properties are expected to be connected to the network later this year and early next year but it will take up to four years for some areas to be connected.

At a presentation in Laois county hall last year, Mr O’ Toole said that, in the case of a small number of extremely remote properties, connection may take up to seven years.

NBI’s website www.nbi.ie has a search tool, where people can check whether their property is within the rollout area and get indicative dates for areas being surveyed. There is also a facility to register for updates. NBI’s contact centre is at 0818 624 624 (lo-call) or [email protected]